Respiratory syncytial virus (RSV) is a common respiratory virus that affects the lungs and its bronchioles (smaller passageways that carry air to the lung) and usually causes mild, cold-like symptoms. RSV is one of the most common causes of childhood illness, infecting most children by two years of age. RSV can also infect adults.

The National Institute for Communicable Diseases (NICD) has in recent weeks noted an increase in RSV circulation, with RSV detection breaching the low threshold [using the Moving Epidemic Method (MEM), a sequential analysis using the R Language, to calculate the duration, start and end of the annual epidemic] among individuals of all ages (Figure 1).  Among children aged <5 years, RSV detection rate is currently at moderate levels (Figure 2).

The RSV season usually precedes the influenza season with the usual average onset at the end of February (range early February – mid-March) over the past 10 years. This year we unusually did not see an RSV season likely related to control measures implemented for COVID-19 leading to reduced RSV circulation. During April 2020 the detection rate of RSV briefly crossed the seasonal threshold in children under the age of five years but then rapidly dropped. From the middle of July the detection rate again breached the seasonal threshold, moving into moderate activity level from the week starting 21 September and rising above the peak of the 10 year mean, albeit more than 20 weeks later than usual. (Figure 2).

The highest number of positive RSV detections in a week this year has been 25 whereas up to 65 positive detections per week were made during the season in previous years. Unusually, this year among patients of all ages, the seasonal threshold was only breached in week 39, reaching low transmission (Figure1). It is unclear whether this increase will be sustained as the timing differs from that of the usual RSV season.

Although this is not a classical timing for RSV season, clinicians are reminded to consider RSV in differential diagnosis for severe respiratory illness, especially in young children. The majority of infants with RSV-associated bronchiolitis do not require hospitalisation, but certain children are at risk of severe disease or require oxygen. Infants aged <6 months may develop severe disease (hypoxia, severe respiratory distress (tachypnoea, nasal flaring or lower chest retractions), inability to feed or apnoea) requiring hospitalisation. 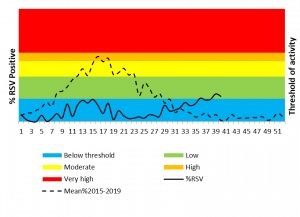 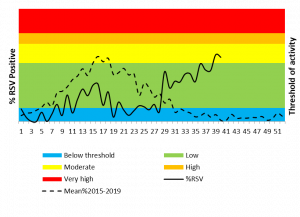 Today the institute reports 354 new COVID-19 cases that have been identified in South Africa,

Today the institute reports 318 new COVID-19 cases that have been identified in South Africa,

Today the institute reports 381 new COVID-19 cases that have been identified in South Africa, which