Travelers during the festive season should be alerted to the infectious disease risks both locally and abroad. Healthcare professionals should also be reminded to be aware of travel associated infections in patients presenting during and after this period.

The Zimbabwean Ministry of Health and Child Welfare recently reported an ongoing outbreak of typhoid fever in the city of Harare. In the official report dated 20 November 2011, the Ministry documented a cumulative total of 356 cases from 32 suburbs of Harare; however, media reports suggest a larger outbreak. The outbreak has primarily been blamed on a shortage of water that has forced residents to seek drinking water from untreated sources. Travelers are urged to take precautions:


Vaccine (Typhim Vi® or Typherix®) may be considered for travelers to the outbreak affected area. The vaccine become effective 2-3 weeks after injection and offers protection for 60-75% of recipients for a minimum of 3 years. Given this limited efficacy, it is important to emphasise scrupulous personal, food and water hygiene at all times during travel.

On 26 October, the Ministry of Health in Senegal reported three cases of yellow fever in the south-eastern regions of the country (bordering Mali and Guinea). Travelers to and from the regulated countries (Box) must obtain a yellow fever vaccination from an accredited travel health clinic, at least 10 days prior to departure, and carry the original certificate with them. This includes passengers in transit, irrespective of whether they have left the airport or the time spent in that country. Vaccines are valid for 10 years, but are contraindicated in pregnant women, infants <9 months, individuals with egg allergies, and certain immunosuppressed individuals (including HIV-infected persons with CD4<200/mm3); however, these individuals still require an official vaccine waiver certificate. Vaccinated travelers should still take precautionary measures to avoid being bitten by mosquitoes due to the many other communicable disease risks transmitted by these vectors (e.g. malaria, dengue).

South African port authorities are strictly enforcing yellow fever vaccination policies. Travelers without a valid certificate upon presentation to the port will be refused entry and sent back to their originating country at their own expense. Returning South African residents without a valid certificate will be subjected to surveillance for up to 6 days.

September to May of each year is malaria season in southern Africa. Healthcare professionals must maintain a high index of suspicion for malaria in returning travelers with an acute febrile illness. Urgent laboratory testing and prompt treatment are required. Travelers to malaria risk areas (including lowveld areas of South Africa bordering Zimbabwe and Mozambique) should be urged to take precautions, including an appropriate course of chemoprophylaxis (mefloquine, doxycycline, or atovaquone-proguanil -Malanil®). In addition, travelers should take preventive measures to reduce mosquito bites, including: wearing long sleeves and trousers during the afternoon, evening and early morning, use insect repellents (containing 30-50% DEET), sleep under an insecticide-treated bed net, keep windows and doors closed/screened, use insecticide aerosol and/or coil at night.

The transmission of malaria in the Laconia region of Greece is ongoing. Between 21 May and 15 November 2011, 63 cases of Plasmodium vivax infection were reported. Prophylaxis is also indicated for travelers visiting this region.

Dengue is the most common cause of fever in travelers returning from the Caribbean, Central America and south central Asia. Dengue is endemic in many tropical and sub-tropical countries, including parts of Africa. From January to 5 August 2011, more than 890 000 cases of dengue were reported to the Pan American Health Organization, including 10 840 cases of dengue hemorrhagic fever and/or dengue shock syndrome. Several countries across the region are reporting high incidence rates, including Brazil, Paraguay, Bolivia, the Bahamas, and Aruba. The mosquitoes responsible for transmission commonly breed within households and are most active during the day. Travelers should take precautionary measures to avoid mosquito bites.

Influenza activity in the temperate regions of the northern hemisphere remains at low levels, with sporadic influenza activity reported in Canada and some European countries (primarily the Czech Republic, France, Ireland, Norway, the Russian Federation, Spain, and Sweden). Significant influenza activity was reported in only a few countries of the tropical zone including Nicaragua, Costa Rica, and Brazil in the Americas, Cameroon in central Africa, and Cambodia and Lao People's Democratic Republic in southeast Asia. Transmission in the temperate countries of the southern hemisphere has returned to inter-seasonal levels, with some persistence of influenza A (H3N2) in Australia. In the United States of America limited human-to-human transmission of a novel influenza A(H3N2) virus was detected with no further reported spread to date.

The southern hemisphere 2011 influenza vaccine formulation remains effective for most strains currently circulating elsewhere in the world. Revaccination will be needed for those that received influenza vaccine more than nine months ago. We routinely advise annual influenza vaccination to prevent illness, both locally and in travelers, and especially for high-risk persons. There is currently limited vaccine remaining in South Africa for pre-travel vaccinations.

All travelers (whether vaccinated or not) should additionally be advised to reduce their risk of exposure or spreading respiratory infections. These include:


Source: Division of Surveillance, Outbreak Response and Travel Health, NICD-NHLS. Visiting registrars of the University of Pretoria and the UK Health Protection Agency. 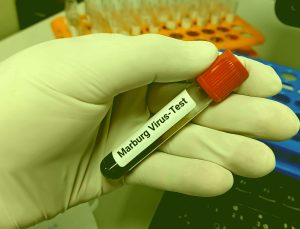 Marburg in Guinea: the value of lessons from managing other haemorrhagic outbreaks