The year 2020 has been coined the year of extremes, thanks to COVID-19. From the excitement of the first lockdown and turning one’s kitchen into a home industry, to missing the embrace of a loved one and finding a newfound appreciation for the technology that connects, one thing is certain – with the pandemic came change. And as the festive season approaches, there has never been a greater reason for celebration as South Africans eagerly plan their beach vacays, bush getaways and stay-at-home family gatherings.

But irrespective of where you are spending your holidays, common infections are prevalent during this period. Here are a few practical tips to keep these top five nasties at bay:

1.What happens on holiday, stays there right? Except for HIV and STIs

During times of celebration and merriment, it’s easy to let your guard down when you are in the heat of the moment with someone special. And this is how seemingly innocent sexual interactions have contributed to South Africa’s astronomical HIV figures. In January this year, Statista reported that globally, 38 million people are currently living with HIV. Accounting for a staggering 7.8 million of those are individuals from the South African population. Knowing your HIV status is the first step in fighting a preventable disease. Sexually active individuals are also encouraged to get into the habit of checking their status on an annual basis. Together with HIV, sexually transmitted infections are easily preventable through practising safe sex and using a condom.

2.Don’t let malaria put a sting in your festivities

In South Africa, there is malaria risk throughout the year, but the season peaks from September to May. High-risk areas include north-eastern KwaZulu-Natal, parts of Mpumalanga and Limpopo. Travelers to the celebrated Kruger National Park and those visiting their families in these areas are encouraged to take antimalarial medicine according to the risk map advice and should practice mosquito-avoidance measures, including applying mosquito repellent, covering beds with insecticide-infused nets and wearing long trousers and sleeves after sunset, to name a few. 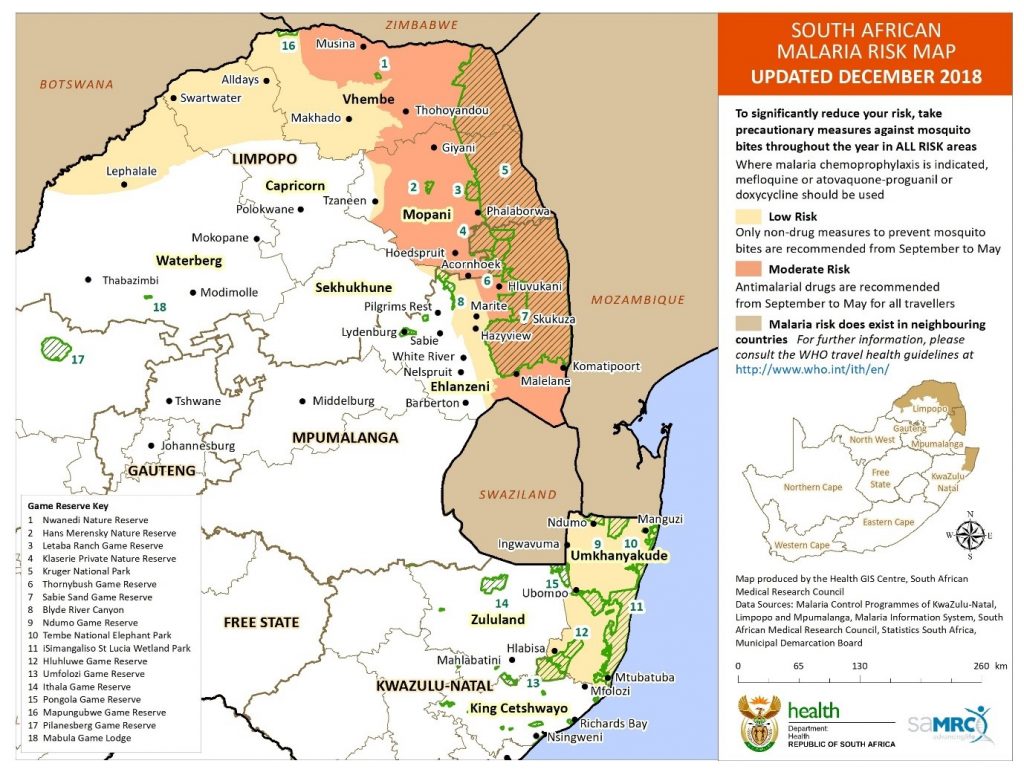 Symptoms can present from 10 days to four weeks after infection, and those displaying signs of fever, chills, headache, fatigue, diarrhea, vomiting and muscle pains should seek immediate medical attention before the condition worsens. To find out more, click here

Those at risk include individuals who hike, camp or work in bush areas. Infected individuals usually get sick five to seven days after being bitten and early symptoms include severe headaches, fever, body pains and nightmares. An inflamed dark brown or black scab spot, an ‘eschar’, can develop anywhere on the body and may go unnoticed or be misdiagnosed. For that reason, individuals who seek medical attention should disclose their recent travel history. Tick bites can be prevented by insect repellents containing a chemical called DEET, which is found products like Peaceful Sleep® and Tabard®. To find out more, click here

A common illness amongst travelers during the festive season is diarrhea, caused by ingesting bacteria, viruses and protozoa that are typically transmitted through poor hand and body hygiene. These gastrointestinal infections normally occur when individuals eat raw or undercooked meat and dairy products, drink contaminated water or unknowingly ingest faecally-contaminated food. When consuming food, individuals should be mindful about what they eat and where they eat, as unhygienic practices of food preparation and storage can put you at risk. Freshly-cooked, hot food is always the safest.

Reducing risk is simple by washing your hands with soap and water before food preparation, before consuming food, and after bathroom use. A sanitiser that contains at least 60% alcohol is an acceptable alternative should water and soap not be available. If symptoms of vomiting or diarrhea start, be mindful to increase your fluid or electrolyte intake to avoid dehydration.

Rabies is a zoonotic disease caused by the rabies virus that is transmitted in the saliva of rabid animals to humans, usually in the form of a bite or scratch. Domestic dogs are the most common carrier of the virus, with more than 99% of human deaths caused by dog-mediated rabies. There are two clinical manifestations of rabies, paralytic and furious, with the latter being more prevalent in human cases.

There is no specific treatment for rabies and once symptoms appear in humans, it is nearly always fatal. However, the condition is avoidable if prompt action is taken and individuals who have been exposed to suspected or potentially rabid animals should seek immediate medical attention. Symptoms include fever, headache, excess salivation, muscle spasms, paralysis and mental confusion. Prevention measures include vaccinating domestic animals against rabies and avoiding contact with stray and wild animals. To find out more, click here

In conclusion, Topaz said that life is meant to be lived as a celebration. And when reflecting back on 2020 let’s celebrate life, responsibly, with family and friends.