The Ugandan Ministry of Health (UMoH) and the World Health Organization (WHO) have confirmed a case of Ebola virus disease (EVD) in Uganda on 11 June 2019. Despite the ongoing outbreak in neighbouring Democratic Republic of Congo (DRC) and numerous previous alerts of suspected EVD in Uganda, this is the first confirmed case in Uganda stemming from the outbreak in the DRC which began in August 2018.

The Ugandan case is a five-year-old boy from the DRC who traveled with his family into Uganda on 9 June 2019 seeking healthcare at the Kagando hospital, where healthcare workers suspected EVD as a possible cause of illness. The boy’s case was confirmed by the Uganda Virus Institute (UVRI). Unfortunately, the child has since demised at the Ebola Treatment Unit, where he was receiving supportive care, in the western Ugandan town of Bwera which is situated at the border with DRC- where the family entered Uganda. The child’s family and others that have come in contact with him are being closely monitored for EVD symptoms.

Response to the case

A joint UMoH and WHO Rapid Response Team has been deployed to the area to identify other people who may be at risk, undertake monitoring of those individuals and to administer supportive care if they become symptomatic. In addition, the UMoH has intensified their community engagement activities by providing education and psychosocial support, and have undertaken to vaccinate all those at risk who were not previously vaccinated.

With the potential for the outbreak to spread, UMoH has already vaccinated 4700 healthcare workers in 165 health facilities and has intensified monitoring. The experimental vaccine being used in the outbreak is 97.5% effective at preventing EVD as suggested by preliminary data. Treatment centers, like the one in Bwera, are already set up in a number of previously identified high-risk areas.

In the week preceding the occurrence of this case, the South African Department of Health (DoH) updated the rapid risk assessment for EVD importation into South Africa. The risk assessment team consisting of experts from the National Institute for Communicable Disease (NICD), the DoH and a representative from the WHO concluded that the risk for importation of an EVD case in the context of the ongoing outbreak in the DRC and now Uganda, remains low. Nevertheless, preparedness planning to support timely detection and response to the importation of a case continues.

The WHO does not recommend that any travel or trade restrictions be applied to DRC or Uganda. The risk for spread beyond the affected areas, including South Africa is low. There are no special precautions or directives for commercial flights, passengers or crew departing on flights bound for DRC or Uganda, nor is there for flights returning from DRC or Uganda. The standard regulations for evidence of a valid yellow fever vaccination certificate apply as per the international health regulations for travellers.

Malaria, as well as dengue fever, yellow fever and other endemic diseases e.g. typhoid fever and/or cholera, are major considerations as possible causes of fever in any persons travelling from risk areas, including the DRC. 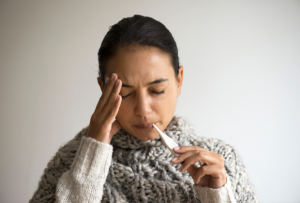 Despite South Africa entering its peak malaria season, many malaria cases are being misdiagnosed as

© NICD 2021. All Rights Reserved
Disclaimer: The National Institute for Communicable Diseases does not provide Medical Advice to the public. For Medical Advice, please consult your Healthcare provider.