From epidemiological week 40 of 2022 to 01 of 2023, a total of 357 laboratory-confirmed cases were reported from five provinces with declared measles outbreaks in Limpopo (140 cases), Mpumalanga (75 cases), North West (114 cases), Gauteng (16 cases), and Free State (12 cases) (Table 2). The geographical distribution of cases across South Africa from week 40 of 2022 until week 01 of 2023 is shown in Figure 1he number of cases continue to increase daily as blood and throat swabs are submitted to the NICD for measles serology and PCR testing. 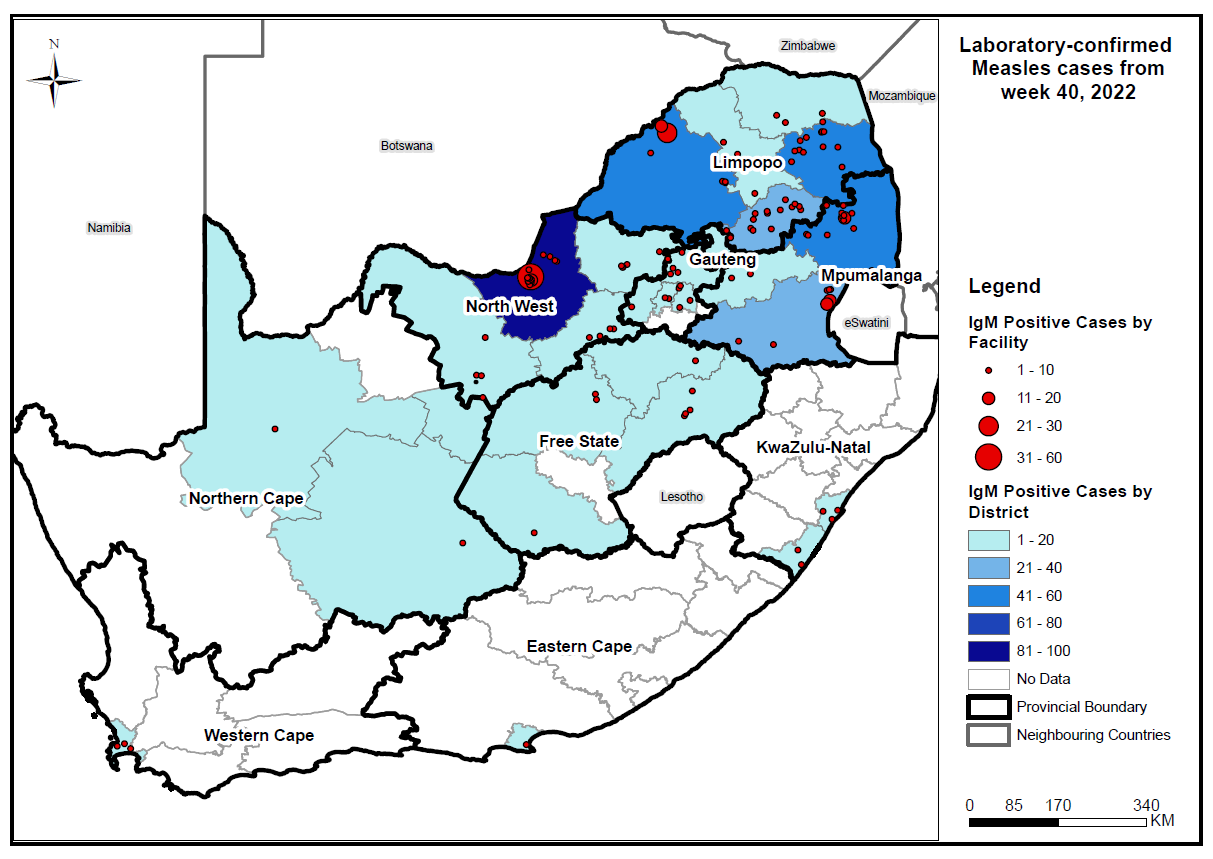 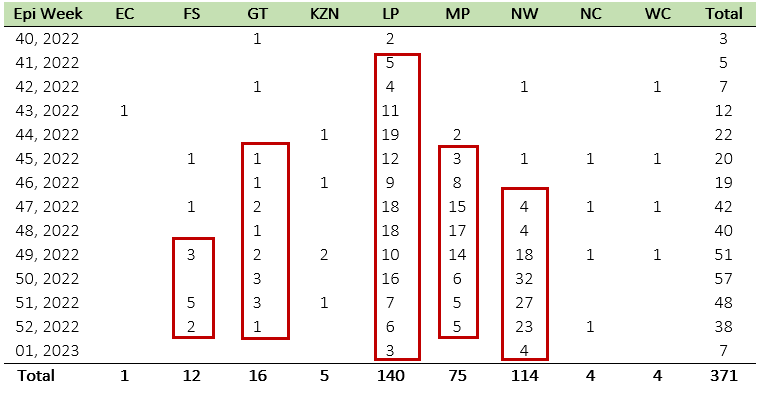 Table 1. Cases of laboratory-confirmed measles tested by the NICD from all provinces in South Africa from epidemiological week 40, 2022 to 01, 2023. Outbreak-associated cases are contained within the red bordered cells* (EC=Eastern Cape; FS=Free State; GT=Gauteng; KZN=KwaZulu-Natal; LP=Limpopo; MP=Mpumalanga NW=North West; NC=Northern Cape). * A measles outbreak is classified as three or more confirmed laboratory measles cases reported within 30 days of onset of disease, in a district. 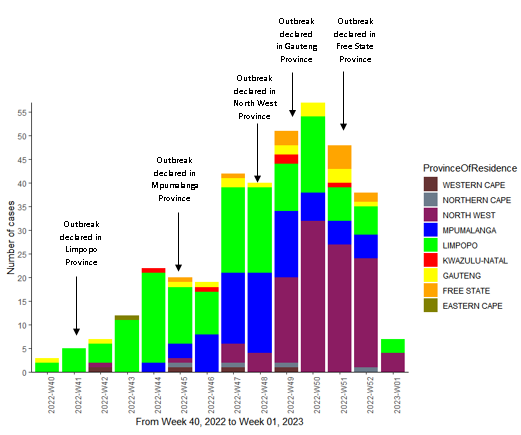 Figure 2. The epidemiological curve showing the number of laboratory-confirmed measles cases in South Africa from week 40, 2022 to week 01, 2023 (ending 08 October, 2022 – ending 07 January, 2023) by specimen collection dates and by province, indicating the weeks in which outbreaks were declared in Limpopo, Mpumalanga, North West, Gauteng and Free State provinces.

Whilst the NICD is presently not able to provide data on hospital admission rates nor on measles mortality rates, Table 4 reflects the number and proportion of laboratory-confirmed measles cases that originate from hospitals as opposed to private health care facilities. Whilst cases that are seen at hospitals may not necessarily be admitted, this figure gives us an indication of the severity of illness, as patients consulted tertiary care facility. Admitted patients will be a subset of these cases. Presently, the highest proportion of cases seen at tertiary facilities occurs amongst the cases that are <1 year of age, reflecting the increased severity of illness amongst this age group.

Table 2. Age distribution of laboratory-confirmed measles cases from epidemiological week 40, 2022 to week 01, 2023, in provinces with a declared measles outbreak

Table 3. Vaccination status for laboratory-confirmed measles cases from epidemiological week 40, 2022 to 01, 2023 in provinces with a declared measles outbreak.

Table 4.  The facility type where laboratory-confirmed measles cases have been identified, for epidemiological week 40, 2022 to week 01, 2023, South Africa. Submission of a specimen from a hospital may suggest (but is not firm evidence) that the patient was admitted.

An overview of the outbreak in the Limpopo Province

The age of measles cases across Limpopo ranged from 4 months to 42 years. Measles virus infection affected mostly the age group 5-9 years (Table 2). Of the 140 measles cases in Limpopo province, 114(81%) had an unknown vaccination status, 12 (9%) were vaccinated, and 14 (10%) were unvaccinated (Table 3). In the Waterberg district, 25 cases of 47 have been reported from Witpoort Hospital in Lephalale. 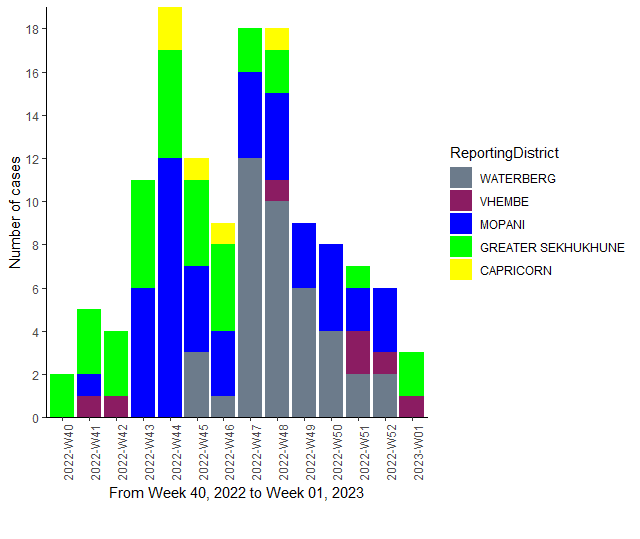 In total, 75 cases of laboratory-confirmed measles have been reported since epidemiological week 40, 2022. The measles outbreak was declared in Mpumalanga province on 11 November, 2022 (epidemiological week 45, 2022). Figure 3 shows an epidemiological curve for Mpumalanga province from week 44, 2022 to week 01, 2023, with Ehlanzeni and Gert Sibande reporting the majority of cases, 41 and 32, respectively. Dwarsloop clinic reported 16 of the 41 cases from the Ehlanzeni district, while Dundonald clinic reported 12 out of the 32 cases from the Gert Sibande district.

The age of cases across Mpumalanga ranged from 4 months to 28 years. The most affected age group by the measles outbreak is 5-9 years (Table 2).  Of the 75 cases, 49 had an unknown vaccination status, nine were vaccinated and 17 were unvaccinated (Table 3). 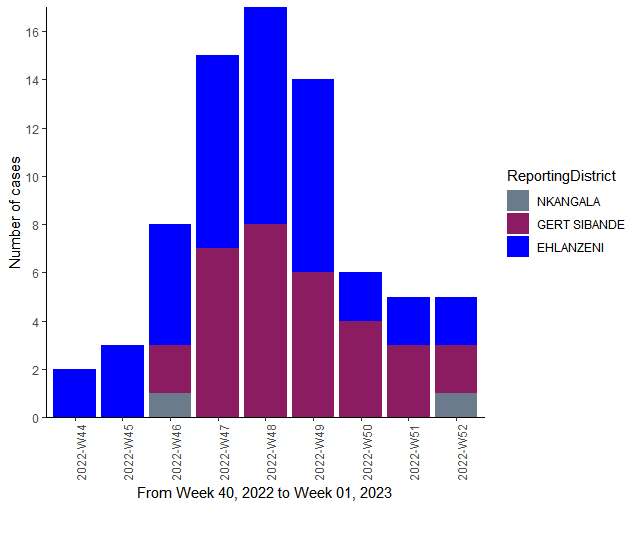 Figure 4. The epidemiological curve showing the number of measles cases in districts of Mpumalanga Province from epidemiological week 44, 2022 to week 01, 2023 by specimen collection dates.

A total of 114 cases have been reported in North West since epidemiological week 40, 2022. An outbreak was declared in North West province on 02 December 2022 after three laboratory-confirmed cases were reported in Ngaka Modiri Molema district. Most of the laboratory-confirmed cases are among children aged 5-9 years, followed by those aged 1-4 years (Table 2). Five of the 114 cases were vaccinated and 99 had unknown vaccination status (Table 3).  Of these 114 cases, 68 were reported from the Ngaka Modiri Molema district, with 38 cases reported from a single clinic, Lonely Park Clinic in Mahikeng. 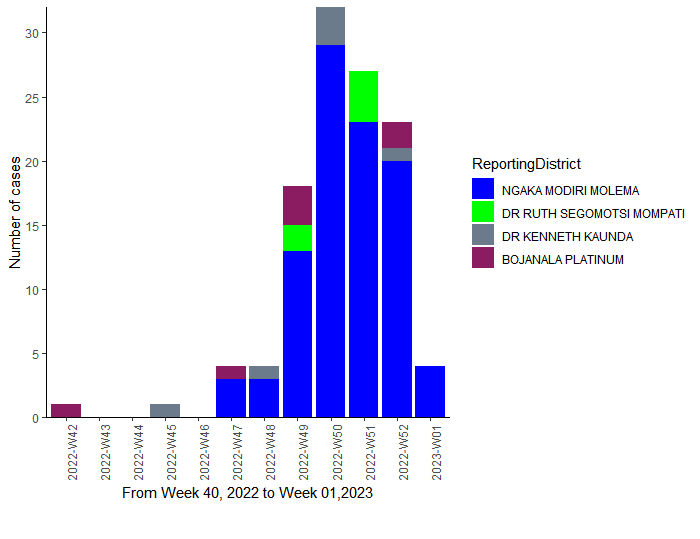 Figure 5. The epidemiological curve showing the number of measles cases in districts of North West Province from epidemiological week 42, 2022 to week 01, 2023 by specimen collection dates

A total of 16 laboratory-confirmed cases have been reported from epidemiological week 40, 2022 to week 01, 2023 in Gauteng Province. An outbreak was declared on 06 December 2022 after three laboratory-confirmed cases were reported at a single health facility, Ethafeni clinic in City of Ekurhuleni Metropolitan Municipality Five cases originated in the Ekurhuleni district and five from the City of Tshwane. Amongst these cases, 15 have unknown vaccination status while one was vaccinated (Table 3).

The number of measles cases in the country continues to rise, however the number of specimens submitted in the last three weeks and the number of positive cases appear to be decreasing in comparison with previous weeks. However, with schools opening in the second week of January, we need vigilance to identify and respond rapidly to cases in school or crèche environments. Important to note, the planned vaccination campaigns should continue with the same urgency, despite the decrease in cases in recent weeks.

Prevention and control of measles outbreaks can only be achieved through vaccination.  Caregivers and parents are advised to review their child’s vaccination records and confirm that they have received measles vaccine. It is never too late to vaccinate – children who have not been vaccinated may receive measles vaccine at any age over 6 months, and free of charge at primary health services. Clinicians across the country are urged to be on the lookout for measles cases. It is understood that the health departments in the respective provinces have commenced with or are planning immunisation campaigns.  For more information about measles, case definition, notification, investigation and guidelines for measles management including vaccination, please refer to our website: https://www.nicd.ac.za/diseases-a-z-index/measles/. 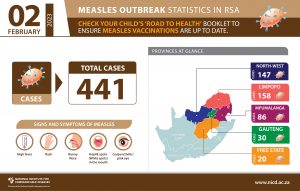 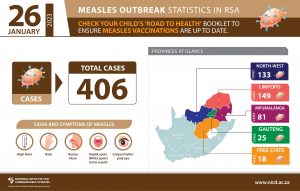 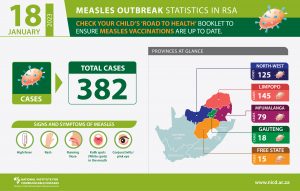